The husband of her mother, whom she had believed to be her father, was killed in an accident at work in a foundry in Joliette when she was barely three months old. “I always thought that I was father-orphaned“. In 2010 after the death of her mother, Gina learned that a friend of her family, who was from Portugal and whom she had always known, was in fact her biological father.  “At 45 years of age I learned that I was half Quebecois and half Portuguese”. I better understood why this man had been part of our lives for all these years”.

The presence of this biological father probably explains why Gina had the opportunity to attend private schools: first l’École Les Mélèzes, an elementary school founded by the Sisters of the Congregation of Notre Dame and then the Seminaire de Joliette a high school run by the Clerics of St-Viateur. 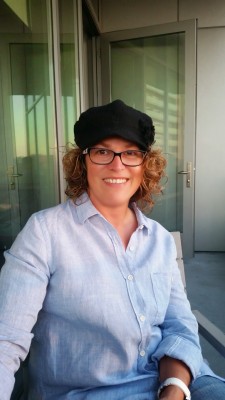 Her biological father immigrated to Quebec in the 1960s from the Azores. “My strong side and spirit of adventure must surely come from him”. He died in the autumn of 2014, “but I had the chance to get to know him better over the last 4 years of his life”. Gina hopes one day to visit her father’s homeland to “go to the source” and to discover his birth place of d’Horta, once considered a compulsory stopover of Portuguese navigators and explorers returning home.